On the train again 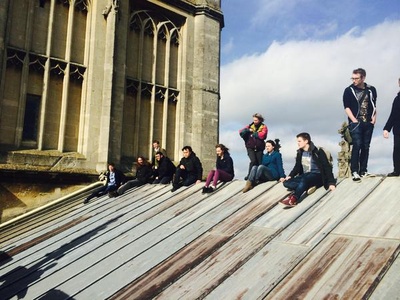 A quick estimate makes me realise I've managed to spend about 30 hours sat on a train on my way to various CDT courses this year. I'm on a train again now, but for once I'm not off to the next university on the list for the latest training course, I'm just going on holiday (though I'm hoping for some solar related activities of a different nature). So was it worth it? Well it's had its ups and downs but on the whole it's been a good experience. When I tentatively accepted a last minute offer of a PhD last year, I hadn't expected I'd be clambering over the roof of Bath Abbey to assess whether it's suitable for solar panels, or making my own solar module at Loughborough. Although that's quite far removed from what I do day to day in my PhD, it's great to get a better idea of the big picture, especially when I'm trying to explain what I do to others. I also have a much better idea of the sorts of research going on at other universities and in companies around the UK, which I wouldn't have had if I'd been on a standard PhD. As for the content of the course, we have definitely been the guinea pigs as the first cohort: organising comprehensive training between seven universities is no easy task! There has been some overlap and there's some room for improvement but I do think I've got a better understanding of some of the PV basics. Although not all the training is directly relevant to my specific area of research, compared to the training I would have received from graduate courses on a standard PhD it's been far more specialised to photovoltaics. The 'two weeks on - two weeks off' timetable can be frustrating both for research and for settling into life at home. On the plus side, I think interspersing research with training is a good thing when I've compared my experience to students from other CDTs, where all their training is at the beginning. It meant I could already be thinking about how what I was learning applied to my area of research, which made it more interesting and relevant rather than just seeming like a continuation of an undergraduate degree. And socially, although friendships in my own university might have developed quicker if I hadn't always been disappearing, living with the cohort for two week blocks has been so much fun and a great way of making friends from all over the country. We all keep in touch and I recently spent a few days of holiday in Southampton with one of the students there, where we had a lovely time visiting the New Forest and the Isle of Wight (apparently that scores bonus points for cohort interaction!). Now that the training is over and I've got more stuck into my research and life in Oxford, I'm pleased to find I'm not so far behind the non-CDT students in my group, considering I have the luxury of a full four years of funding. And in addition I've gained lots of transferrable skills, including becoming an expert in packing for two weeks and ordering 14 copies of a receipt at a restaurant! But the thing that really made it was the cohort, and I'm looking forward to seeing everyone again in November - and meeting Cohort 2!