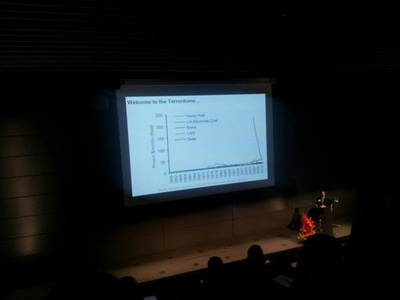 It’s been a little over a year since I started my CDT PhD with New and Sustainable Photovoltaics, the intense CDT modules seem to have flown by, and whilst I am relieved that I am now purely focused on my own research; I feel privileged to have been part of CDT cohort 1. The quality and breadth of content delivered by the CDT's core-level training modules has been outstanding, and has been strengthened further by the cohort model that has been adopted for the CDT. The focus of my own research has been on the Perovskite Solar Cell (PSC). I’ve spent several months churning through the literature and making devices of my own, so it seemed fitting to spend the last few days of my first year attending the 1st International Conference on Perovskite Solar Cells and Optoelectronics. The conference took place in the EPFL centre in the beautiful, but oddly sterile city of Lausanne. I manged to catch a few days either side of the conference to explore a bit of Swiss lakeside city, the cathedral and night was incredible but I was surprised by how I felt the city had less character than I expected. The not so distant mountains do leave a lasting impression, but as I sat listening to the first invited talk I found myself being more impressed by the weight of the perovskite scientific community. From my own experiences I have nothing to compare to PSCO, but in my own opinion there is a huge amount of good quality research being done across the globe to push our understanding of the perovskite material forward, and of course; to push PSC’s efficiencies higher. The first invited talk left some serious milestones in its wake, for those of you that are interested the PCS’s have broken the 20% device efficiency barrier by following on from a recipe published earlier this year. These milestones led to a few half-mumbled ‘Sorry, look I know we are not at 20% but here is our research…’ intros later in the conference, but each and every talk had its own useful take home message. For the most part the attitude and atmosphere of PSCO was polite, with disturbances coming from a few big names when the argument of how to correctly calculate the exciton binding energy cropped up. I’ve seen the exact same thing unfold before a few months ago on the CDT module based in Oxford, and I have to say that on my second viewing I was feeling like ego’s are getting in the way of an actual conducive discussion. In general I believe that the questions session at the end of any talk shouldn’t be about embarrassment, if corrections or an alternative argument needs to be raised made then it should be done in an informative and polite way, and that doesn’t always seem to be the case. I have to give credit to Paul Meredith who gave the closing invited talk and approached the topic of his groups differing opinions with care and clarity. Through the poster session and discussion with various researchers I managed to answer some of my own personal questions which should help me a lot back in the lab at Sheffield, however I am still coming to terms with the overall approach on sharing research in this community. I understand the motivation behind it but I find the share a little but not everything ideology to be incredibly frustrating. There must be a large body of research that is being slowed down by groups not sharing exact recipes. The culmination of my own research, lab work, CDT modules and time at PSCO has taught me that to make outstanding PSC’s every little detail is important, but that every little detail is never shared.