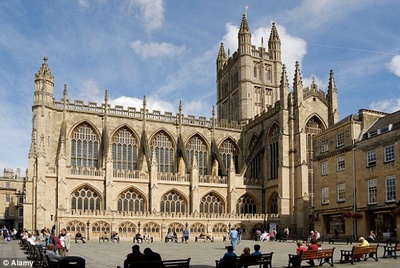 Last March, I and the rest of cohort 1 had the pleasure of exploring Bath Abbey and even visiting the rooftop. As well as enjoying spectacular views, we had another task; we were to appraise the possibility of installing solar panels on the Abbey roof!

At first, I admit I was sceptical. Solar panels on the Abbey? Imagine! Except we didn't have to imagine, we could calculate. After measuring the roof tilt and borrowing plans of the Abbey, we took to our computers and found that, even with the new, eviscerated solar subsidies coming into force this month (February 2016), a rooftop system could pay for itself in about 15 years, compared to a guaranteed lifetime of 25.

As part of our study, we learnt about the Abbey’s Footprint programme. As part of their commitment to reduce their carbon footprint and improve energy efficiency, the Abbey is aiming to install a heat exchanger to heat the Abbey using waste heat from the city’s famous Roman Baths, which are just next door. A photovoltaic installation on the roof would provide a significant amount of the power required to run the system, slashing their energy bills and replacing carbon-heavy power from the grid with free, clean power from the sun. When the power wasn't needed, it could be fed into to the grid for a profit.

For a lot of the CDT our research is on the really very fundamental science of solar devices, so I think it was a good experience for us to look more closely at what our research is ultimately aiming towards: actual panels on actual rooftops. We had to consider the practical considerations of a real building and examine whether it makes financial sense to install a photovoltaic system.

What really surprised me was how much money needed to be spent on equipment I’d previously considered to be periphery – inverters, charge controllers, racking and even wiring to name just a few. It turned out that the cost of modules made up less than half the cost of the complete system. I think it’s important as scientists that we understand where our research stands in the grand scheme of things, so I really appreciated the opportunity the Abbey provided us to do just that. Especially for me as a theorist, where I'm accustomed to thinking about individual electrons hopping from molecule to molecule, an eye on the big picture is critical!

You can read the cohort 1's Solar Viability Report for Bath Abbey here.